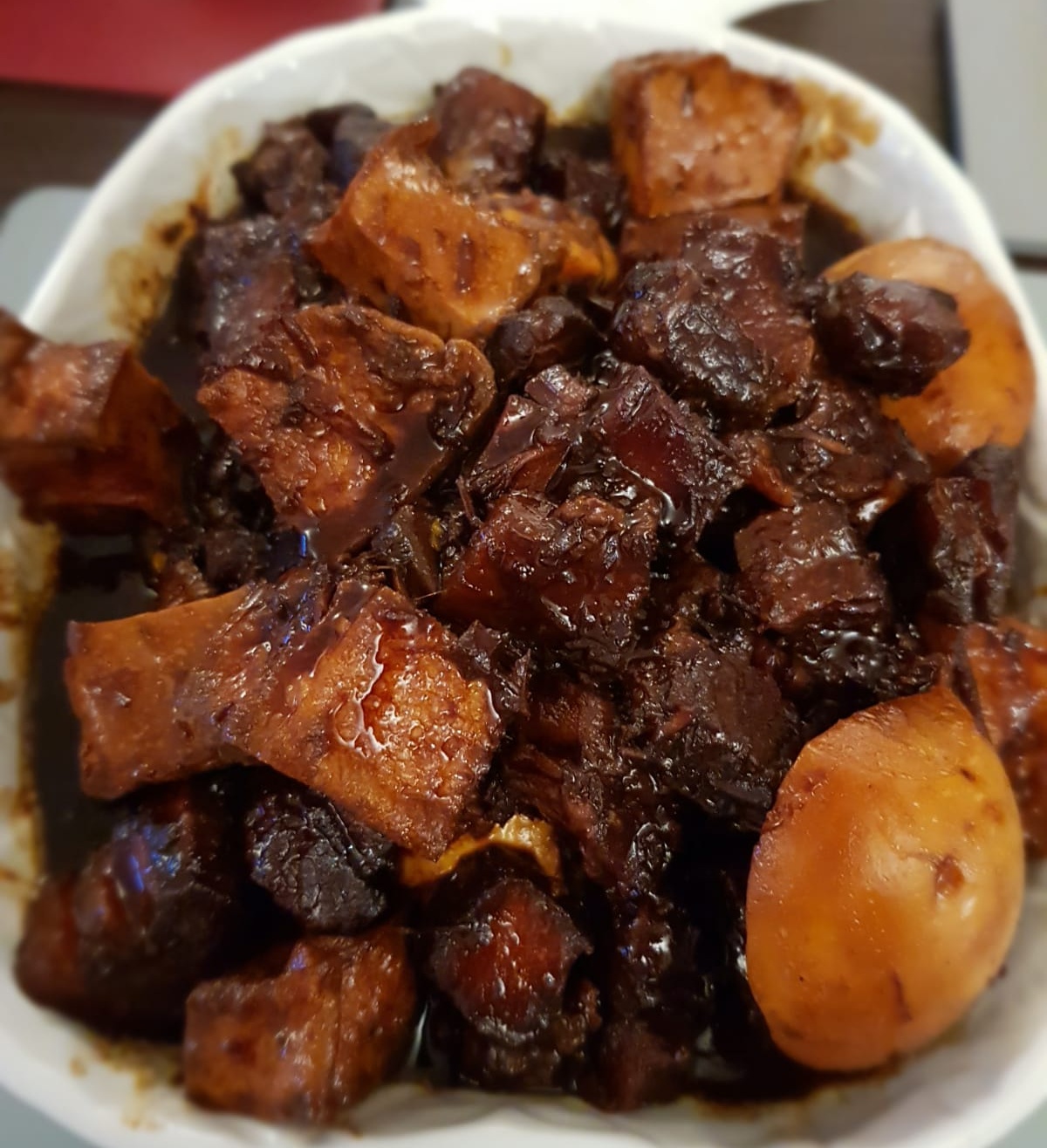 A tasty, welcoming, comforting and homely dish, Tau Yew Bak has the honour of being part of the first meal I ever ate in Malaysia, mere hours after landing at Penang Airport. However I have very little recollection of said meal! After arriving for my first visit to Malaysia in 2013 with my then-girlfriend now-wife, we were treated by my parents-in-law to a banquet at Nyonya Breeze restaurant in Straits Quay. All manner of delights were served to us, including a large earthernware pot of Tau Yew Bak. But unfortunately, having just completed my first long haul flight from the UK, my brain must have waved the white flag and shut down, as I don’t really remember any of the evening. And no, there was not any alcohol involved!

Tau Yew Bak, or Babi Tauyu as it is sometimes known, is a dish of marinaded and braised pork, and is usually made in Nyonya households where each family will have their own variations of the recipe. At the heart of the dish the flavours come from soy sauce and garlic, along with the fantastic oil released by the pork after slow cooking. To this base, a variety of aromatics are sometimes added, such as cinnamon sticks, ginger, star anise, or five spice powder. Additionally, to soak up the lovely sauce, you often find chunks of tofu, boiled eggs and other bits of liao added.

This recipe is based on my wife’s grandmother’s hand-written recipe, and doesn’t include any aromatics. Indeed, the first time I made Tau Yew Bak I asked my wife whether I should add some cinnamon and star anise; I was subjected to a look that told me plainly NO! Though I encourage you to experiment should you wish.

500g of belly pork, with the fat still on, and ideally the skin too
3 tbsp light soy sauce
2 tbsp dark soy sauce
1 tsp ground white pepper
5 peeled cloves of garlic
2 hard boiled eggs
200g firm tofu (tau kwa), cut into cubes (you can also fry this beforehand if you prefer)
30g sugar
hot water, probably keep a kettle’s worth on standby
(optionally chicken can be used instead of pork, I’d suggest chicken thighs rather than breast)

Pick out a bowl that can fit in your pork belly, and add in the light soy sauce, dark soy sauce, white pepper and sugar. This forms the marinade. Mix it well and then leave it for about 10 minutes for the sugar to dissolve. In the meantime, slice your pork belly into bite-sized pieces, around 2cm in width, or larger if you have a bigger bite!

Add your chopped meat to the marinade and stir around until the pork is evenly coated. You can then leave the marinade to do it’s job for around 30 minutes, longer if you wish. After the meat has had it’s chance to soak up some loveliness, time to heat up a pot and add a tsp or two of oil to it. Add the cloves of garlic, and fry for a few minutes until fragrant. Now you can add in the pork, including all the remaining marinade, and turn up the heat to medium-high. The trick is now to stir the meat and get it to firm up and release it’s oil, whilst controlling the heat of the pan and making sure the marinade doesn’t dry up too quickly. After around 10-15 minutes of stirring, the meat should have given up it’s lovely flavoursome oil, and the marinade will have mostly evaporated.

Next, add enough hot water to cover the meat, and bring the lot up to the boil. Once boiling, cover the pot and reduce to a simmer. Now check the meat every so often, and once the liquid in the pot has reduced by half (after probably half an hour) top up the water so that the meat is covered, and repeat. After the second half hour, top up the water again and repeat. After the third half hour, check the meat is tender and falls apart easily. If it doesn’t, repeat for a fourth time.

After the meat is tender and the sauce has reduced by half, turn up the heat and allow the pot to bubble for a while, to add thickness to the sauce. The last step is now to add your boiled eggs and tofu, turning the heat down to a simmer and letting them cook in the sauce for a few minutes.

Serve with boiled rice, some stir-fried vegetables, and if possible a dollop of sambal on the side.

Koey Teow Soup with broth made from pork ribs and

Egg Fried Rice with Fishballs. Lots of garlic and

Sambal Okra with Prawns. Cooked in essentially the